Art works in Tabla Rasa's ongoing exhibits in the front of the gallery are more expensive, but after viewing those exhibits continue to the backroom (where art works are stored and packed for shipping and the gallery owners have their office) for an art sale in which all art works have prices no greater than $400.

View the slideshow and read the entire article on examiner.com

The 10th of Tevet is the traditional day of remembrance for victims of violence whose death dates and/or burial places are unknown. Tonight, December 16, 2010 at 7:30 PM a memorial service and rally will be held at Brooklyn's Parade Grounds (adjacent to the Tennis Center across the street from Prospect Park) to remember all victims of violence as well as the recent suicides of gay young adults.

Read the entire article on examiner.com

A friend of mine is driving in from out of town for a few days and looking for a parking garage around Carroll Gardens/Cobble Hill/Park Slope or even downtown Bk if there is anything cheaper there. Is there anything that you guys can suggest? Googling came up with a couple of places, but it's always better to have a personal suggestion :)

An organization that does really outstanding work for special-needs kitties, Blind Cat Rescue and Sanctuary, Inc., asked for this message to be passed along to anyone who might be able to help:

This was taken from their Facebook post, you can read more about the situation there or contact the number/email address listed above. This is such a heartbreaking situation. Several people have offered to help pay for transportation and re-homing expsenses if a home is found in time. Please, please pass along this info.

More info on Blind Cat Rescue and Sanctuary at their website: http://www.blindcatrescue.com/

This weekend enthusiasts and creators are gathering at the Brooklyn Lyceum, 227 Fourth Avenue between Union and President Streets in Park Slope, for King Con, the borough's first large comics convention, featuring fifty-plus exhibitors and top talent appearing in readings and panel discussions.

Read the entire examiner.com article and view a slideshow of illustrations and book covers by KingCon writers and illustrators.

So I'm helping out on a student film in an attempt to build a spaceship. Well, the interior of one.

Does anyone know where to get cheap/free scrap metal, tubes, pipes, wires, switches, lights, and general hardware? Any scrap metal yards willing to give some stuff up around? Any junkyards that would be good for searching? Any good places for cheap lighting (like LED strips and the like)? It's a student production, so the cheaper the better.

Hi all. My Mom is coming for a visit at the end of the month and I'm trying to help her find a hotel. I'm living near Brooklyn College and she was hoping to stay somewhere closeby. I've googled, but the closest thing I came up with was the HoJo's on Utica, which doesn't strike me as a great place to stay.

Does anyone have any experience with any of the hotels in the area? A friend said he thought there were B&Bs nearby, but didn't have any specific info (he also suggested there were Kosher hotels in Borough Park, but Mom is arriving on a Saturday, so I'm thinking that won't work).

Hi guys. I won't bore you with all the details, but the long and the short is that I need to be out of my current (Bed-Stuy) apartment by October 1. I've put in an application for an apartment (Midwood), but I won't find out for sure if I have the place until Monday or Tuesday, and I want to prepare for the worst in the event that this place falls through (I've already had one apartment get sniped out from under me).

I have four cats. I have an offer of a couch for me, but the cats would have to go elsewhere.

Can folks recommend either a cat sitter who can house cats at their place, or else a good kennel? Ideally in Brooklyn, but I'm open to other boroughs, depending on the situation.

I'm also open to any other brilliant suggestions folks might have. :)

x-posted to the usual suspects

So, I'm moving to Seattle at the end of the month and, unfortunately, I can't bring my four betta fish with me. :(

All of them come with tanks, decorations and aquarium thermometers, if you need them. (two are in a 2.5 gallon tank, one's in a 5 gallon, and one's in a 3 gallon clear bin)

Baby is a cellophane veiltail: 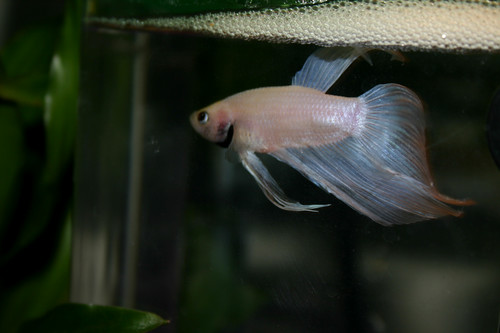 They're very dear to me and I am desperate to find them good homes before I move. If you'd rather email me, it's erinbardwell at gmail.com
Collapse